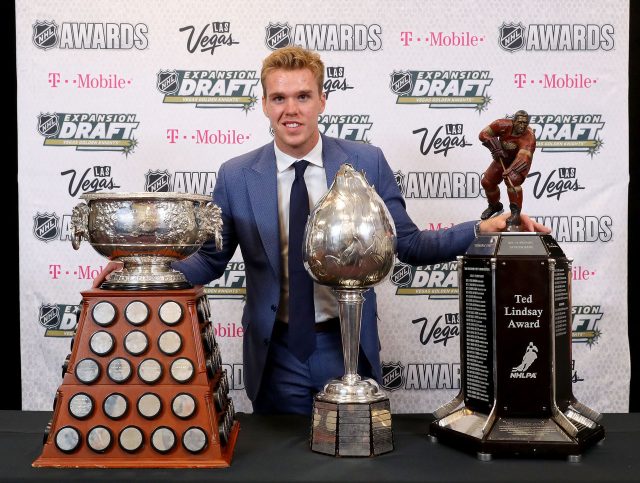 The Hart Trophy or “MVP” to the layperson is given to the best player in the NHL each season. Last year, Connor McDavid of the Oilers took home the award in just his second season. He opened at +800 in the preseason, third best odds in the league behind Sidney Crosby and Patrick Kane.

This year, he unsurprisingly opens as the favorite, marking the first time Crosby didn’t open as the pre-season favorite since the 2011-12 season.

McDavid and Crosby easily have the best odds in the list. Each has the ability to put up over a point a game and push for 100 on the season, which is a feat that has become a rarity in recent years. Crosby has veteran stars like Evgeni Malkin, Phil Kessel, and Kris Letang at his side while McDavid has other youngsters like Leon Draisaitl and Ryan Nugent-Hopkins. Both teams should be cup contenders so the award will likely go to the man who can put up the most points. First to 100 wins?

The third name on the list is one that I find particularly intriguing at that price. Auston Matthews of the Maple Leafs scored 40 goals as a rookie…not a very common occurrence. The Leafs barely squeaked into the playoffs last year, but the sky is the limit this year. Along with Matthews, they also have great young talent in William Nylander, Mitch Marner, and Morgan Reilly and an excellent coach in Mike Babcock to boot. If you believe in the Leafs, take a shot at Matthews at +850.

Early movers include Erik Karlsson and Patrick Laine. Karlsson has been one of the league’s best defensemen for a number of years and is the top blue-liner on the list. However, there hasn’t been a D-man to win the award since Chris Pronger did so all the way back in 2000.

Laine, on the other hand, appears to be the second coming of Alex Ovechkin. In 73 games last year as a rookie, he scored 36 goals. The Jets aren’t expected to be one of the better teams this year, but if he can lead them to the playoffs in a similar fashion that McDavid did for the Oilers last year (and score 50+ goals), he has a shot.

Check back for more odds updates and follow us on Twitter @SportsInsights for more news, stories, and more.