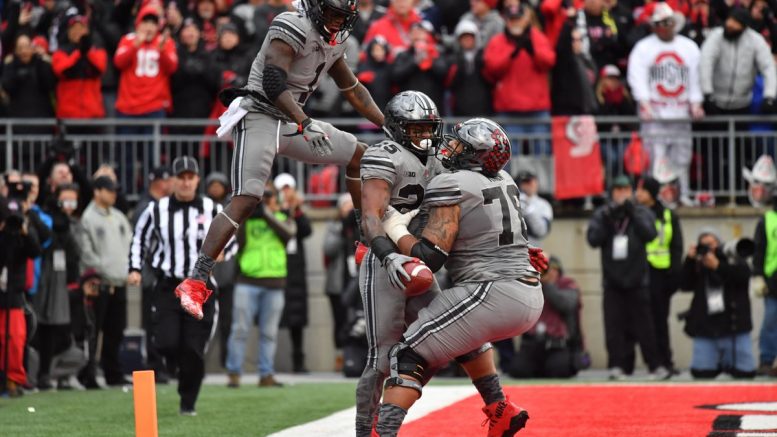 Ohio State comes back to take a 1-pt lead. They reached +500 on the live moneyline. pic.twitter.com/NLnm0oAiPX

In weekday action, Stanford (opened -21.5, closd -18) came back to squeak by Oregon State 15-14 without RB Bryce Love. BC throttled FSU on Friday night 35-3, yet there was actually considerable line movement on FSU leading up to the game, moving from -3.5 to -6.5.

Not good FSU, not good. Seminoles opened -3.5, closed -6, and lost 35-3 at BC. Eagles fans also rushed the field for some reason. pic.twitter.com/wRs8ojDSsL

Now it looks like Jimbo Fisher’s job could be in serious jeopardy if it wasn’t already. BC’s win clinches the Over for their Season Win Total (4), while FSU’s loss moves them to 2-5 SU and 0-5-2 ATS, only team in the nation without a cover.

James Franklin is now 0-9 in road games vs AP-ranked opponents, including 0-4 at Penn State. This was the first loss by single-digits but Nittany Lions did cover the spread.

Despite the public win on Penn State, contrarian bettors did very well overall. Fading the most popular bets in the most-bet games of the day went 7-2 ATS including covers by Oklahoma, Mississippi State and Oklahoma State.

Iowa State was 100/1 to win the Big 12 prior to the season. Got a chance. pic.twitter.com/RJb6raZLvV

Arkansas (+2.5/+3) made a huge comeback to reward both spread and moneyline bettors, beating Ole Miss 38-37. The Hogs went down 31-7 in the 2nd quarter but won it on a late field goal.

UCF had been 17-0-1 on the 1H/2H/Game lines, but failed to cover both the Game and 1H against Austin Peay in a blowout victory.

Based on closing lines from Pinnacle, Georgia Tech is the only remaining undefeated ATS team (6-0-1). Yellow Jackets closed +14 at Clemson and lost 24-10.

South Florida’s string of consecutive 30+ point games came to an end last night in a 28-24 loss to Houston. South Florida had set an NCAA record of 24 straight games reaching the feat.

Florida Gators were embarrassed by Georgia 42-7. Believe it or not, there was actually line movement toward the Gators, but the game was over in the 1st half.

Last night’s Utah/Oregon total closed at 49, lowest for a Ducks game since 2009. Oregon ended up winning 41-20, easily going over.

Bad Beats on the Total:

UMass/Appalachian State total closed 56.5. The game was tied 20-20 going into overtime and UMass ended up winning 30-27, sending the game over by a half-point.