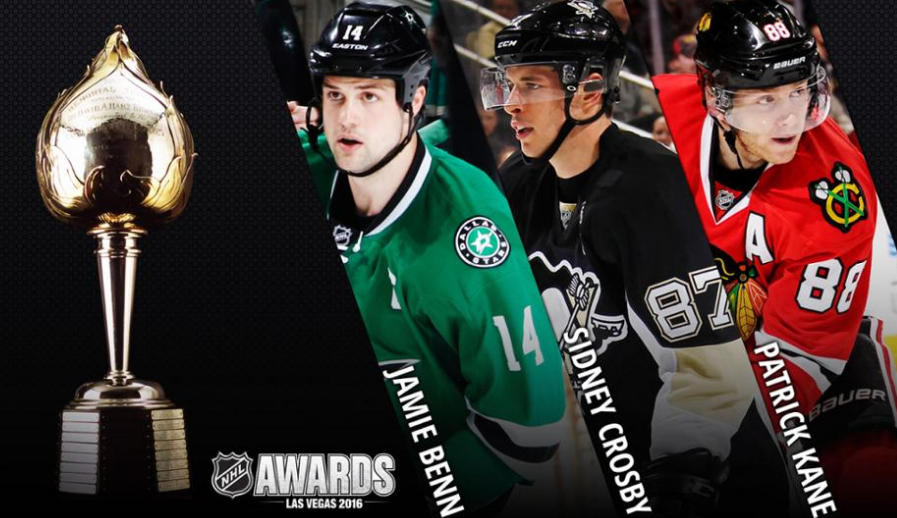 In NHL
By Josh Appelbaum

On Wednesday, June 22nd, the NHL will hand out their annual awards for the 2015-16 season.

The event will be hosted by comedian Will Arnett and once again takes place in Las Vegas, this time at the world-famous Hard Rock Hotel & Casino. While the awards ceremony is always must-watch television for die-hard hockey fans, there is an added buzz surrounding this year’s ceremony following the recent announcement that Las Vegas will receive an NHL expansion team, possibly as soon as the 2017-18 season.

Even if you’re not a hockey fan, the NHL Vegas expansion is big news because many see it as a way forward for legalized sports gambling efforts. It could also pave the way for another professional sports team to move to Sin City, likely the Oakland Raiders.

Throughout the season, we’ve been tracking the odds for all the major NHL Awards categories. The table below displays the latest odds from Bovada.

Kane had a career year this past season, leading the NHL with 106 points (46 goals and 60 assists). The Blackhawks forward has already won three Stanley Cups, a Calder Trophy (Rookie of the Year), Conn Smythe Trophy (playoff MVP) and an Art Ross Trophy (scoring champion). This year, he is a shoo-in to win his first MVP award.

Karlsson has already won two Norris Trophies. He is once again the favorite to be named the league’s best defenseman, however, it’s a tight race. Karlsson gets the edge over Doughty because he logs heavy minutes (28 per game) and led all d-men in scoring (16 goals, 66 assists, 82 points).

Burns was offering great value at +400, especially after leading the Sharks to the Stanley Cup Finals and posting 75 points during the regular season (27 goals, 48 assists). However, he has slipped to +550 over the past day and looks to be out of the running.

McDavid (+115) was the preseason favorite to win Rookie of the Year, however the highly touted #1 pick had a disappointing season, playing in only 45 games due to injury. Panarin burst on the scene out of nowhere, signing with the Blackhawks as a free-agent out of Russia. He led all rookies in scoring (30 goals, 47 assists, 77 points) and is a heavy favorite to win the award.

Kopitar is a slight favorite to win the Selke, awarded to the league’s best defensive forward, and his odds have improved slightly over the last 24 hours. However, he could be eked out by Bergeron, who is looking to win his 4th Selke. At even money, the Bruins forward is offering great value to bettors.

The Coach of the Year award opened as toss-up between two deserving candidates. Gallant was initially a slight favorite, having led the perennial cellar dwelling Panthers to the playoffs for the first time in nearly a half decade. However, Trotz (who led the Caps to the best regular season record) has made a big last minute push, moving from -105 to -150.

Hockey is a sport that prides itself on toughness and physicality, but also sportsmanship. Kopitar is the favorite to win the Lady Byng, awarded to the NHL player who exhibits the best “gentlemanly conduct combined with a high standard of playing ability.” This could end up being the second award of the night for the newly-named Kings captain, provided he can beat out Bergeron for the Selke.

Will you be watching the NHL Awards on Wednesday night? Are you going straight chalk with all of the favorites? Are any other finalists offering better value?

Feel free to leave your thoughts in the comments section below.