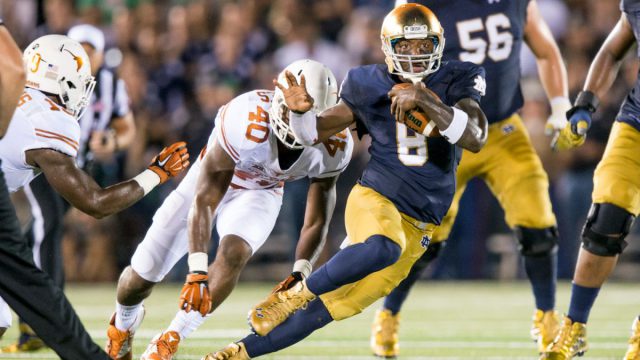 The 2016 college football season kicks off soon and there are still several critical position battles for the nation’s most prominent schools. On Thursday, August 4, the market-setting Bookmaker.eu (CRIS) posted odds for ten of college football’s most intriguing quarterback battles. The limits were only $250, but these odds provided valuable insight.

The list below displays the quarterback battles for ten marquee programs.

Bateman is still the favorite but his odds have dwindled. He’s now barely listed with a 50% chance to start Week 1 against USC.

Sean White is now the -175 favorite after opening at +235. Auburn will likely start all three quarterbacks at some point this year and all may play in the opener as well.

Despite his struggles in the Peach Bowl last season, senior Sean Maguire (-600) looked like a lock to win the starting job at Florida State. However, in the previous week Deondre Francois began taking snaps with the first team offense and drew comparisons to Christian Ponder from head coach Jimbo Fisher. Then Maguire got injured and is now listed as doubtful to play in the opener, so odds are now off the board.

Eason has clearly solidified his spot to be the Week 1 starter, though some are still speculating Brice Ramsey has a chance despite lofty odds.

When this prop was first released, the starting quarterback battle at USC between junior Max Browne (-135) and highly touted freshman Sam Darnold (+110) was quite intriguing. Although the coaching staff had refused to say which player looks better in practice, early money was taking Browne, and this weekend he was declared the starter for Week 1.

Looking for the latest odds, public betting trends and breaking news updates? Make sure to check out our free NCAAF odds page.