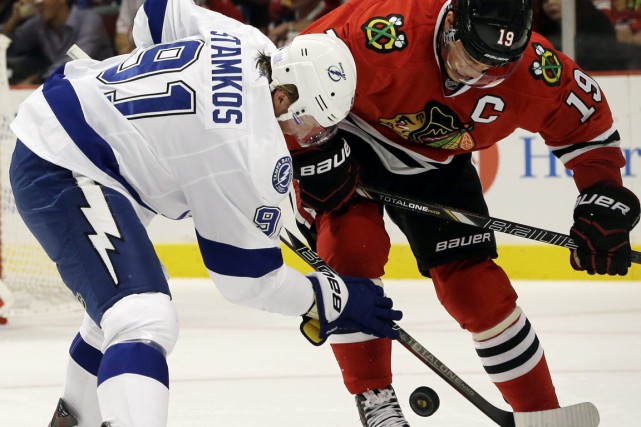 The Canadian hockey world will have to watch another all-American Stanley Cup Final with the Tampa Bay Lightning taking on the Chicago Blackhawks beginning on Wednesday, June 3. This will mark the 21st consecutive season that an American team will win the Cup and 4th straight season that both teams in the final are American.

Chicago is a -150 favorite to win the Cup despite Tampa Bay having home-ice advantage, and Game 1 could be crucial to the series. Since 2005, favorites have won the opening game of the Stanley Cup Final in 9 straight years, while the home team has won the opener in 8 of 9 years. The Lightning are currently getting only 36% of moneyline bets for the opener but have moved from -116 to -130 at Pinnacle, indicating some sharp money on Tampa Bay to grab a series lead.

If there is one team that can turn a series around it’s the Blackhawks. Since the ’06 playoffs, Chicago is just 30-27 in Games 1 through 3 of a playoff series, but are an astounding 38-15 in Games 4 through 7.

The odds on the Blackhawks winning the Cup have not wavered too much during the year but the odds on the Lightning have– below shows the Stanley Cup odds throughout the season from 5Dimes:

Prior to the playoffs, Rangers goalie Henrik Lundqvist was the favorite to win the Conn Smythe Trophy but it now appears to be Jonathan Toews’ award to lose. Toews was listed at 25:1 to win before the playoffs, the 10:1 favorite heading into the Conference Finals, and currently the best odds at 4:1. Teammates Duncan Keith and Patrick Kane provide the closest competition on Chicago while Tyler Johnson and Ben Bishop have the best chance from the Lightning.

The Blackhawks are looking for their 3rd Cup in 6 seasons and will be in good shape if they can earn a split from the first two games in Tampa Bay. Many signs are pointing to a Chicago victory in 6 games, where they could hoist the Cup in front of their home crowd for the first time during their run.

As always you can track all the latest line moves, betting percentages, injuries, game information and more at our Free Live Odds page.