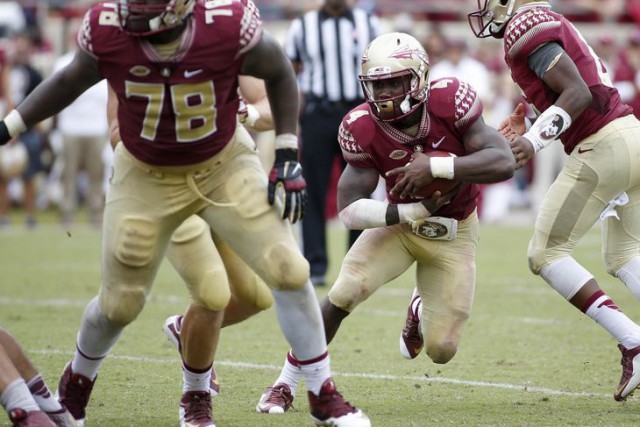 It’s easy to get excited about the upcoming slate of College Football games after last weekend’s action, which almost saw Jacksonville State (who opened at +47 on the spread and +67,500 on the moneyline) nearly upset 6th-ranked Auburn.

In last week’s article, we highlighted three games of interest and pinpointed value on two teams based on line movement and betting trends — Toledo (+21) and Utah State (+13). While Utah State barely covered the spread (they lost to Utah 24-14), Toledo actually upset 18th ranked Arkansas, 16-12. For what it’s worth, Toledo closed as a consensus +1000 underdog on the moneyline.

As we look ahead to the Week 3 lines, one of the more interesting takeaways is how little line movement there has been. During the first two weeks of the season we saw multiple line moves of 6+ points; however, this week there hasn’t been a single line move of at least three points. This would seem to indicate that oddsmakers are getting a better feel for the quality of each team, and sharp bettors have had less opportunity to hammer bad numbers.

This week’s marquee matchup features Alabama hosting SEC-rival Mississippi and, at the time of publication, it’s the most heavily bet game of the week. Unfortunately, there’s no story to tell since public betting has been evenly split and the line hasn’t moved since opening Bama -6.5 at Pinnacle.

With that in mind, we look ahead to the three most interesting line moves for Week 3 of the College Football season.

In the rare major conference Friday night game, the Florida State Seminoles will travel to Chestnut Hill to face the Boston College Eagles. Last week FSU (closed -28.5) failed to cover the spread, defeating USF 34-14. On the other side of the ball, BC bettors may be in the running for worst beat of the season.

Boston College closed as 44-point favorites against Howard with an over/under of 58.5. The Eagles jumped out to a 41-0 lead after the first quarter and a 62-0 lead at halftime. Any bettor who took BC or the over looked golden, until the coaches decided to implement a sort of mercy rule and play with two 10-minute quarters in the second half. Because of this, the game was deemed no action since any contest must go at least 55 minutes for action.

What’s particularly interesting about this blowout is how it has affected the line at 5Dimes. On Friday, 5Dimes offered a look ahead line where Florida State was listed as a 14.5-point favorite. However, when the lines actually opened on Sunday morning it was an entirely different story.

This reverse-line movement is an excellent indicator that sharp money likes Boston College, but there are other trends which confirm this value. Since 2005, BC has gone 37-27 ATS in home games, including a 10-5 mark since Steve Addazio took over as head coach. The Eagles have also posted a 17-8 ATS record against ranked teams, including a 5-0 mark under Addazio.

It’s tough to be excited about a Boston College team whose victories both came against FCS schools, but sharp money looks to be taking the home dog in this ACC showdown.

Temple opened as 12.5-point favorites at Pinnacle and, according to our public betting trends, are currently receiving 81% of spread bets. Despite this overwhelming public support, Temple has dropped from -12.5 to -10 at Pinnacle. This reverse-line movement indicates that sharp money likes UMass as a double-digit home underdog.

We should point out that these trends put Massachusetts in rarified air. Over the past decade, there have only been 87 games where a home underdog of at least 10-points has seen at least a 1-point reverse line movement while receiving less than 25% of spread bets. For some perspective, our College Football database includes nearly 8,000 games.

You can see that following reverse line movement has been very profitable for these large home ‘dogs, but it’s very important to shop for the best line. Many offshore sportbooks are offering UMass +10.5 and those extra-half points are incredibly valuable — especially around key numbers like 3, 7 and 10.

It’s interesting to see how different sportsbooks can take very different paths to reach the same conclusion. CRIS opened Cal as a 3-point favorite and less than an hour later moved them all the way to -7.5 before settling at -6.5. Pinnacle opened slightly later with Cal listed as a 7-point favorite before dropping them down to -6.5.

What’s interesting is that we could technically use this to point out reverse-line movement at Pinnacle since Texas opened +7 and dropped to +6.5 despite receiving just 33% of spread bets. This is actually validated by the line movement at CRIS since there was immediate buyback once the game reached Texas +7.5 and +7.

CRIS and Pinnacle are considered market-setting sportsbooks and accept some of the highest limits of any offshore books. In this instance, CRIS opened their lines first and posted a bad number. Pinnacle was able to wait to see where the market settled before posting their lines.

We would likely lean towards Texas +7 based on the contrarian value, but right now there are very few books offering that number. This is one of the major reasons that we suggest bettors have accounts at multiple sportsbooks: one sharp (like CRIS or The Greek), one square (like Bovada or Sports Interaction) and one reduced juice (like Pinnacle or 5Dimes).

In one of the more rare occurrences, UCLA opened as a 16.5-point favorite at Pinnacle but are receiving just 25% of spread bets. It’s uncommon to see a favorite receiving such limited public support, however, the Bruins have actually moved to -17. This reverse line movement once again indicates that sharp money likes UCLA.

It’s also interesting to note that BYU has been plagued by injuries this season. Starting quarterback Taysom Hill suffered a season-ending foot injury while starting running back Jamaal Williams withdrew from school for personal reasons and will redshirt this year.

For UCLA, bettors likely already knew about their vaunted defense and running back Paul Perkins entering the season. However, nobody could have realized that freshman quarterback Josh Rosen would be an immediate star. In just two games, Rosen has passed for 574 yards and 4 touchdowns with just 1 interception in wins over Virginia and UNLV. Entering the week, Rosen (+2000) had the 12th best odds of winning the Heisman at Bovada.

The table below displays how the line for this game has moved since opening on Sunday.

These numbers are subject to change before kickoff, so bettors should be sure to visit our free College Football odds page for the latest lines, injuries, public betting trends and more.