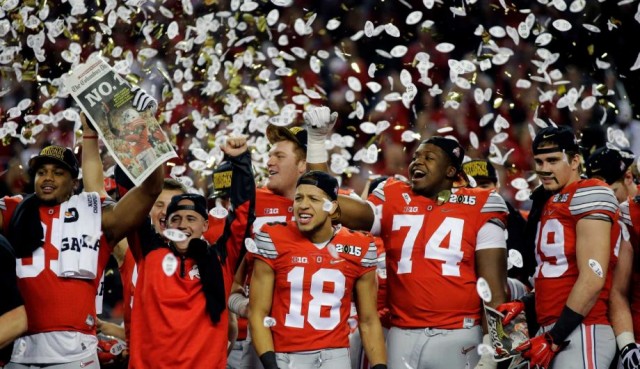 Within hours of Ohio State winning last year’s National Championship in the first ever College Football Playoff, oddsmakers were already looking ahead to the 2015-16 season. The first shoe to drop was a prop bet involving the question on everybody’s mind — who will be the Buckeyes starting quarterback next season?

Although Cardale Jones had started only three games in his career, he was the early favorite over both two-time Big Ten Player of the Year Braxton Miller (2012 and 2013) and J.T. Barrett, who set the single-season OSU record for total offense and touchdowns. Since the end of last season, Miller has declared he’ll move to WR and the prop bet re-emerged with much different odds, but Jones still the slight favorite to start Week 1:

With so many options at quarterback and an estimated 16 returning starters, Ohio State also opened as the early favorite to repeat at National Champions next season at +600 odds. This came as little surprise considering that the Buckeyes are loaded with All-American talent across the board and one of the best coaches in the country. Other top contenders include TCU, who will return one of the top Heisman candidates in quarterback Trevone Boykin, as well as perennial powerhouse Alabama. ESPN Chalk contributor David Purdum reports that Ohio State is the most popular bet to win the 2015-16 National Title but rivals Michigan are also up there.

Four times more $ has been bet on the Ohio State #Buckeyes to win the national title than any other team: http://t.co/m2BBj26YsO — David Payne Purdum (@DavidPurdum) August 3, 2015

The table below displays the current College Football futures at 5Dimes and will be updated throughout the season.

Finally, BetOnline has added a prop bet regarding the winning conference of the National Champion:

Who do you think will win the National Championship? Will Ohio State be able to repeat? Is there a sleeper that oddsmakers are overlooking? Make sure to leave your thoughts and questions in the comment section below.