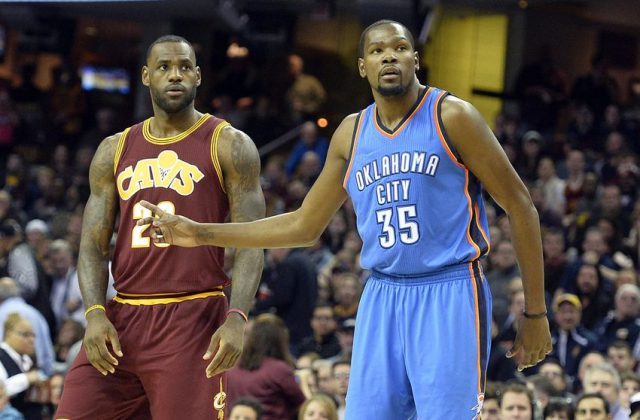 Casual bettors overwhelmingly like betting winning teams, especially if they have at least one bona fide superstar. With LeBron James and Stephen Curry leading the charge, you would expect Cleveland and Golden State to be two of the most popular teams in the league.

Using our historical database, I wanted to determine the most popular teams in the NBA by examining the number of bets at two of our contributing offshore sportsbooks. After that, I wanted to reveal the most heavily bet games from the past year and determine exactly how much public betting increases between the regular season and postseason.

My research found that during the 2016 NBA regular season, we tracked an average of 9,112 bets per game. During the playoffs we have tracked an average of 25,044 bets per game — an increase of nearly 175 percent! The value of betting against the public is directly correlated with the number of bets placed on each game, which explains why many of our contrarian systems (including fading the trendy underdog) have been so successful during the postseason.

As it turns out, the Warriors and Cavaliers have been the two most popular teams during the 2015-16 season. On average, Golden State received 66.53% of public bets per game at our contributing sportsbooks. That number includes both regular season and postseason games; although the percentage was slightly lower during playoffs when public bettors are increasingly willing to take underdogs.

Over the past season the Warriors have closed as underdogs in just five of 98 games, all of which came on the road. That’s particularly interesting because the look ahead lines at 5Dimes have the Warriors listed as 2.5-point underdogs for Games 3 and 4 in Cleveland.

Although underdogs have been historically undervalued, favorites thrived during the 2015-16 NBA season going 616-598 against the spread (ATS) during the regular season and 47-32 ATS during the playoffs. In fact, the Warriors were the most profitable team for bettors last season posting a record of 56-42 ATS.

During their 24-game winning streak to start the season, Golden State went 16-7-1 ATS while receiving overwhelming public support. This was great news for casual bettors and awful news for sportsbooks. According to Scott Cooley, an Odds Consultant for Bookmaker.eu, “Even with inflated lines during the winning streak, we couldn’t dissuade public action on the Warriors.”

The Cavaliers, who were the second most popular team among bettors, weren’t nearly as detrimental to sportsbooks. The Cavs have gone just 47-47 ATS, and the level of public support dropped off slightly from last season. This was also confirmed by Cooley who said, “The square support on the Cavs cooled off early, much earlier than it did last season.”

The table below ranks all 30 NBA teams in terms of popularity among bettors during the 2015-16 season. We have also included their ATS record and units won for each team.

The Warriors and Cavaliers were the two most popular teams last season, followed by the Spurs, Thunder and Bulls. Despite the popularity of these five teams, $100/game bettors would have actually lost $538 betting on them every game. That’s largely due to the struggles of Chicago, who remained popular among bettors despite their 36-46 ATS record this past season.

You may also notice that many of the league’s least popular teams posted losing records this season, which raises questions about the value of betting against the public. Just last week Bet Labs manager Travis Reed wrote an article which explained that there are still several winning strategies that utilize our public betting percentages, but simply betting against the public no longer wins at the 52.38% threshold needed to cover the standard juice as most sportsbooks.

Although we found that teams receiving less than 35% of spread bets went 239-214 ATS (52.8%) during the 2015-16 regular season and 11-8 ATS (57.9%) during the playoffs, teams receiving less than 20% of spread bets were far less successful. It’s typically only the league’s worst teams (like the 76ers, Nets and Kings) that receive such limited public support, but there are some great opportunities to fade these teams as we examined when we looked at late season tanking strategies.

Bettors are very reactionary and will consistently gravitate towards the league’s hottest teams. For example, the Celtics were 31-23 ATS at the All-Star break, and this caused them to emerge as one of the league’s most popular teams among bettors. However, as books began to properly account for the team’s talent and shade their lines to account for public action, that value dissipated. After the All-Star break the Celtics were just 14-19 ATS, yet they continued to garner public support.

It will be interesting to see how public betting fluctuates during the NBA Finals, since the Cavs and Warriors have been the most popular teams in their respective conferences. Although a blowout victory for either team could dramatically impact public perception, I believe we will see fairly even levels of public betting during the Finals, with the Warriors receiving a slight majority. Not only did Golden State receive the highest percentage of spread bets this season, they were also pounded by bettors who thought they would win the championship.

It’s worth noting that this Cavs/Warriors Finals matchup is the worst case scenario for sportsbooks in terms of the futures market. These are the two most popular teams in the league, and bettors have been hammering both teams throughout the season. “In terms of futures liability, this was obviously our nightmare matchup,” said Cooley. “We’re not going to do well either way but we’ll be rooting for Cleveland to claim its first championship.”

So how popular were the Warriors this season? They were featured in 12 of the 20 most heavily bet regular season games, and that number would have been 13 had I not included the 2016 NBA All-Star game. It was also interesting to see that bettors love betting basketball on Christmas Day, with four of the ten most heavily bet regular season games taking place on December 25.

The table below displays the 20 most heavily bet games from the 2015-16 regular season.

The only games to receive more bets were Game 2 and Game 5 of the NBA Finals last season. That lofty bet count coincides with extremely high TV ratings.

The table below displays the 10 most heavily bet games from the 2015-16 playoffs.

With increasing gambling coverage in the mainstream media and a matchup including two of the league’s most popular teams, this may be the most heavily bet NBA Finals of all-time.

Sportsbook Insider subscribers are able to view the number of bets on every game, but bettors can also track the latest lines, betting trends, injuries and more by visiting our free NBA odds page.