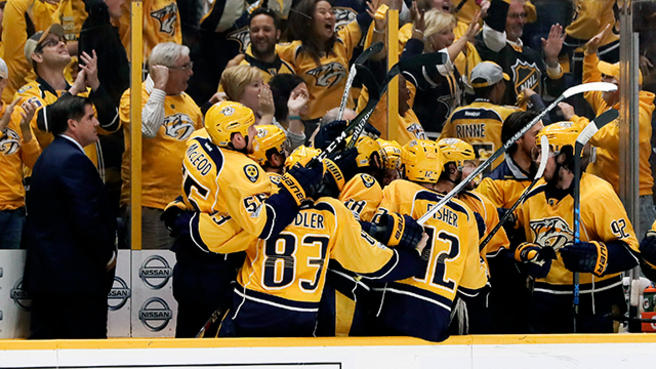 Not many people would have picked the final four of the 2017 NHL season, but we’re left with Penguins vs. Senators in the East, and Predators vs. Ducks in the West. Below shows the series odds for each matchup from 5Dimes and BetOnline:

The Penguins couldn’t finish off the Senators on the road and will have to take care of business at home in game 7 if they want to repeat as Stanley Cup Champions. They have opened up at -190 for the series finale, which is in line with their other home games in the series.

Nashville won on the road in Game 5 to take a 3-2 series lead. They now head back home with a chance to reach the Stanley Cup, and are -330 to advance.

The Penguins got a nice road win in Game 4 to even the series with Ottawa 2-2. Pittsburgh is back up to -210 to advance to the Stanley Cup.

Nashville’s late goal gave them a huge home win in game 3. They will look to put the Ducks in a corner with a game 4 win that would likely put their series odds up around -500.

The Penguins’ odds aren’t quite as high as they were before the series now that Ottawa technically has home-ice advantage, but it’s clear that the Penguins will be favored in every game. They opened at -130 on the road for game 3.

The Predators are slight favorites to beat the Ducks, but Anaheim opened with better Stanley Cup Odds. The Senators have some extra days of rest over the Penguins, but enter the series as +265 underdogs. BetOnline clearly mis-priced the series initially and has already moved to PIT -288/OTT +243.

At BetDSI, series bets are nearly split for Nashville/Anaheim. 60% of tickets are taking Ottawa as an underdog over Pittsburgh.

Below shows Stanley Cup odds throughout the playoffs and highest odds during the season:

Ottawa is the biggest surprise here, reaching 70:1 odds back in October 2016. The Preds were as high as 30:1 in early February before really getting healthy. The Ducks were as high as +2000 in early March, but were +1000 just last week. The Penguins have been one of the top contenders from the preseason and are the clear favorites to win the Stanley Cup. Here are the lookahead Stanley Cup series prices from 5Dimes:

And for those curious about how the playoffs have shaken out so far, here are the opening round series odds: