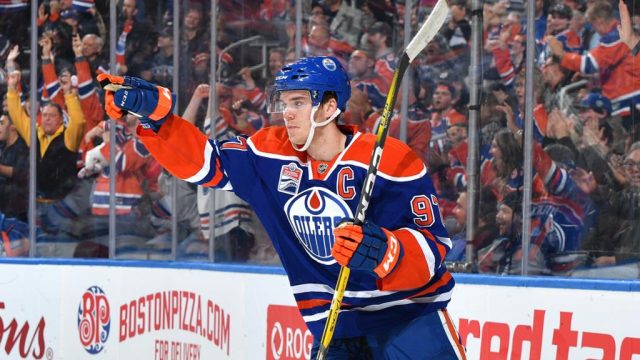 Tomorrow night, not only will the Vegas Golden Knights reveal their first roster to the world, the major NHL awards will be announced.

Unlike some of the other sports, most sportsbooks don’t offer odds frequently (or at all) for the NHL awards. However, Bovada has updated their odds for the three finalists for all of the major awards. Many of them appear to be near-locks, including some of the biggest.

Sidney Crosby just won the Conn Smythe trophy and another Stanley Cup, but it appears the next great NHL star will be taking home his first MVP trophy. Though he never had many doubters, Connor McDavid proved that he was the real deal this season by leading the league in points with 100 and turning the Oilers into a Stanley Cup contender. Crosby had a great year himself, but had former MVP Evgeni Malkin helping the Penguins along the way. As we’ve seen in the past, the Penguins can do pretty well when Crosby is injured. Without McDavid, the Oilers may have been a cellar-dweller like they were the decade before he was drafted.

Brent Burns has been a solid player for years, but had a career year this past season. Erik Karlsson had a great second half to put himself in the mix, but as the odds reflect, this award has been in Burns’ grasp for months.

The Blue Jackets were one of the bigger surprises in the league this season and Sergei Bobrovsky is a big reason why. I found it surprising that he was named the third finalist for the Hart Trophy, but I’m not surprised that he is the favorite for the Vezina. He led the league in both goals against average and save percentage and did so without the experienced defensive core in front of him that Braden Holtby had.

The Calder Trophy race for the top rookie was much tighter than Auston Matthews’ -2000 odds suggest. Matthews finished the season with 40 goals and 69 points, but Patrik Laine was right behind him and actually averaged more goals and points per game. The Maple Leafs also made the playoffs, which Laine’s Jets did not do, but Matthews had help from two rookie teammates in Mitch Marner and William Nylander, both of whom topped 60 points. Either way, Matthews and Laine look like they may become the next Crosby and Ovechkin.

Matthews wasn’t the only reason the Maple Leafs made the playoffs this year. Mike Babcock, former long-time Red Wings coach, made the choice to go to Toronto even though they weren’t going to contend right away. He made the right choice, though, as the Maple Leafs’ young core looks like it could turn the franchise around. John Tortorella of Columbus and Todd McLellan of the Oilers weren’t too shabby either. All three did fine jobs of helping young teams overachieve so if you were to bet on a “bigger” dog amongst these awards, this prop may be for you.

Patrice Bergeron and Ryan Kesler are plenty familiar with this award. Bergeron has three Selkes in his trophy case and has finished second in the voting twice. Kesler has won the award once and has four other top five finishes to his name, including third place last season. I would suggest staying away from this award because there are many different factors that the voters will be considering. If anything, lean towards Kesler at plus money.

The Lady Byng Trophy is given to the most gentlemanly player in the league…probably not an award Brad Marchand will be winning anytime soon. The small-in-stature Johnny Gaudreau managed to record just four penalty minutes all season long…which is actually pretty impressive. The other two finalists both finished with 12 PIM, which is still impressive. My money will be on Gaudreau, who I feel should be slightly favored over Tarasenko.