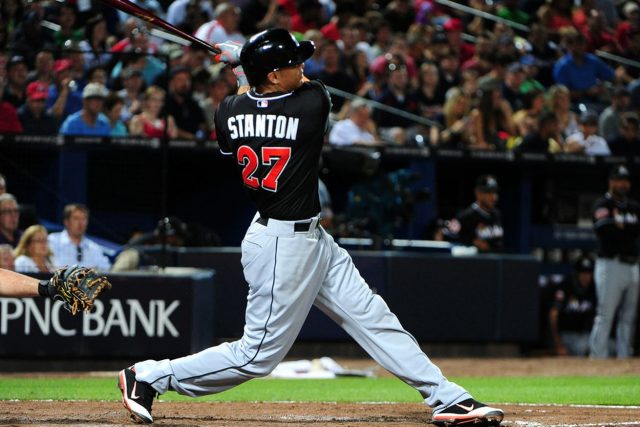 Last season Baltimore Orioles right fielder Mark Trumbo slugged a career-high 47 home runs to the league. This was the second straight season in which a member of the Orioles took down the home run crown, following Chris Davis’ 47 home run performance during the 2015 campaign. Prior to the start of the season, Trumbo was listed at 40/1 to lead the league in home runs.

Although the upcoming MLB season won’t start until the beginning of April, the Westgate Las Vegas Superbook posted odds on the 2017 MLB home run leader over the weekend. Despite significant injury concerns, Marlins outfielder Giancarlo Stanton (+800) is listed as the pre-season favorite for his third consecutive season.

The table below displays the most recent odds from the Westgate Superbook and will continue to be updated throughout the season.

Aaron Judge. Cody Bellinger. Logan Morrison. Justin Smoak. Eric Thames. Scott Schebler. All of the big names that are in the home run race year in and year out are at it again. Wait…who?

2017 has been the year of the home run, with the 2.54 home runs per game even topping the 2000 season’s 2.34 HR/game. These former no-names have probably ruined a lot of preseason bets placed on some of the favorites. Giancarlo Stanton remains in the running, but most of the other names towards the top of the preseason list have seen their odds drop substantially.

At the moment, Cody Bellinger is all the rage. Despite not being called up for almost a month, Bellinger’s 24 bombs are second best to Judge’s 26. If all goes according to plan, we could see a few names top 50 home runs this season and hopefully, see somebody push for 60. Ahh, how I miss the steroid era.

(The following was written on January 9th)

There’s no questioning Stanton’s raw power, but the 27-year old slugger has been plagued by injuries. Stanton missed 88 games due to a wrist injury in 2015 and 43 games due to a groin injury in 2016. Stanton signed a 13-year, $325 million contract back in 2014, so it wouldn’t be surprised to see the Marlins give their slugger frequent rest to ensure he’s healthy for the duration of the deal. For that reason, it would be wise to focus on a few players with longer odds.

Nelson Cruz has slugged at least 40 home runs in each of the past three seasons, which makes him an intriguing option at 30/1. Khris Davis, who smashed 42 home runs for the Oakland Athletics last season, seems mispriced at 80/1. Heck, Mark Trumbo seems like a solid bet to repeat as the home run champ considering his 30/1 odds.

The 2017 MLB season begins on April 2, but Spring Training will be starting up in late February. Make sure to bookmark our free MLB odds for the latest odds, betting trends, injuries, futures and more.

Which players do you think are offering value? Are any players being undervalued? Please leave your thoughts and comment in the section below.