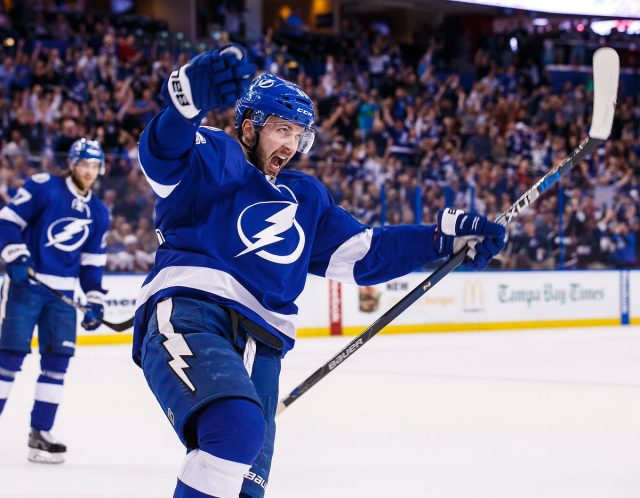 In NHL
By Mike Marsh

For hockey fans it’s never too early to start thinking about the upcoming NHL season. Over the summer, BetOnline posted divisional odds for all 31 teams and we’ve updated odds since then:

The Lightning opened as +300 favorites to win the Atlantic Division after missing out on the playoffs for the first time since the 2012-13 season. To be fair, the Bolts lost Steven Stamkos for the majority of the season due to a knee injury, but if their star player can stay healthy for the 2017-18 season Tampa Bay will certainly contend for the divisional crown. The 24-year-old Russian Nikita Kucherov broke out in a big way with Stamkos on the shelf, and together the two elite scorers will form one of the most potent offensive duos in the NHL.

Oddsmakers also like the up-and-coming Maple Leafs chances to win the Atlantic, as they opened with the second-best odds at +375. Led by the stellar young trio of Auston Matthews, William Nylander and Mitch Marner, the Leafs will continue to get better and should be in the mix all season.

It’s not surprising to see the defending Stanley Cup Champions with the best odds to win the Metropolitan Division at +225. The Metropolitan was a juggernaut last year, and it will be difficult for teams to contend with the Penguins and last year’s best regular season team, Washington Capitals (+250), for the top divisional seed.

However, in such a competitive division it wouldn’t be too far-fetched for a team other than the Pens or Caps to come out on top. The New York Rangers (+500) and the Columbus Blue Jackets (+600) both improved this off-season, with the Blueshirts adding a stud defenseman in Kevin Shattenkirk and the Jackets swapping Brandon Saad for the dynamic Artemi Panarin.

In the Central Division the Blackhawks and Predators opened as the co-favorites at +350, but there is a lot of value here with underrated teams like the Wild and the Stars. The Wild, who are available at +375, are capable of taking another step forward in 2017-18. Minnesota will look for more consistency after starting off last season on fire before running out of steam down the stretch.

The Stars, who are available at +400, have made significant off-season moves. After years of searching for a franchise goalie, Dallas went out and inked Ben Bishop to a 6-year, $29.5-million deal. They also turned heads with the signing of free agent Alexander Radulov, who could make for a perfect fit on the top line alongside Jamie Benn and Tyler Seguin.

The Pacific is one of the more unpredictable divisions of the bunch. Last years top three teams, the Ducks (+300), Oilers (+275) and Sharks (+400) figure to be in the mix again and it wouldn’t be a shocker to see any of those talented squads finish in first place when it’s all said and done.

Don’t count the Kings out of it either, who are available at +450 after a sub-par season. Jonathan Quick, who missed significant time last year with a groin injury, will be back to patrolling the crease in Los Angeles. With a two-time Stanley Cup winning core of players including former Norris Trophy winner Drew Doughty, Anze Kopitar and Jeff Carter, the Kings shouldn’t have too hard of a time becoming relevant again in the Pacific.

Check back later in the off-season for updated odds. Have any questions for the staff at Sports Insights? Utilize our live chat or e-mail us at help@sportsinsights.com.