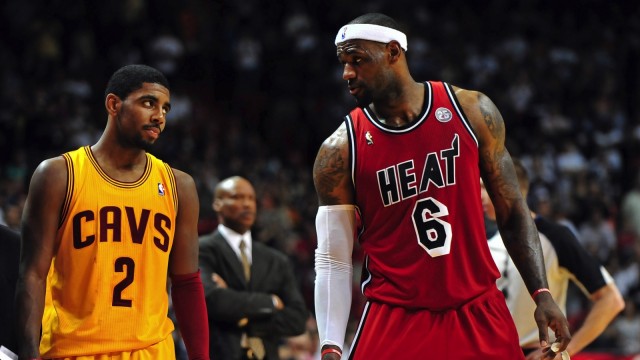 The NBA season doesn’t tip-off until October 28th when the San Antonio Spurs host the Dallas Mavericks, but oddsmakers have already begun posting a number of prop bets and futures for the upcoming season. Earlier today we posted 2014-15 NBA MVP odds and we’ve been updating the movement of the futures market throughout the off-season, but season win totals always represent an interesting opportunity for bettors.

Following the 2014-15 NBA schedule, the sportsbook Bwin posted their win total projections for all 30 teams. To nobody’s surprise, the San Antonio Spurs and the new-look Cleveland Cavaliers opened with the highest win total (tied at 57.5). However, these win totals did not match up identically with the futures at some of the sharper offshore sportsbooks.

While there was generally consensus regarding the league’s top teams, there were some discrepancies. For example, the Houston Rockets season win total (48.5) was lower than the Memphis Grizzlies (50.5) despite the fact that the Rockets odds of winning the NBA Championship (+1300) are far greater than the Grizzlies (+5000).

Considering that both of these teams are members of the Western Conference and will play a similar strength of schedule, this is truly perplexing. I would imagine these odds will be updated shortly, but in the meantime betting under 50.5 wins for the Grizzlies seems like a solid bet. That opinion was essentially confirmed on Tuesday (9/30) when the Westgate Superbook opened the Grizzlies win total at just 48.5.

The table below compares the current win totals at two offshore sportsbooks (Bovada, Bwin) and one Las Vegas sportsbook (Westgate) along with the current futures at 5Dimes. We will continue to update this table as more books report.

Another interesting comparison involves the LeBron James former running crew — the Miami Heat. Although the Heat lost King James to the Cavs in the off-season, they were able to re-sign Dwyane Wade and Chris Bosh while adding Luol Deng via free agency.

These moves should keep them competitive, however, their win total is just 43.5 which trails or ties fellow Eastern Conference teams like the Raptors (47.5), Hawks (44.5) and Hornets (43.5). Despite lower win totals than these teams, the Heat’s title chances (+3000) are markedly better than the Raptors (+7000), Hawks (+8500) and Hornets (+8000). With teams writing the Heat off following the loss of LeBron, it would appear that there could be some value on over 43.5 wins for Miami.

Which teams will you be betting? Do you also expect a lot of odds movement when sharper sportsbooks like CRIS and Pinnacle post win totals? Please leave your comments in the section below.