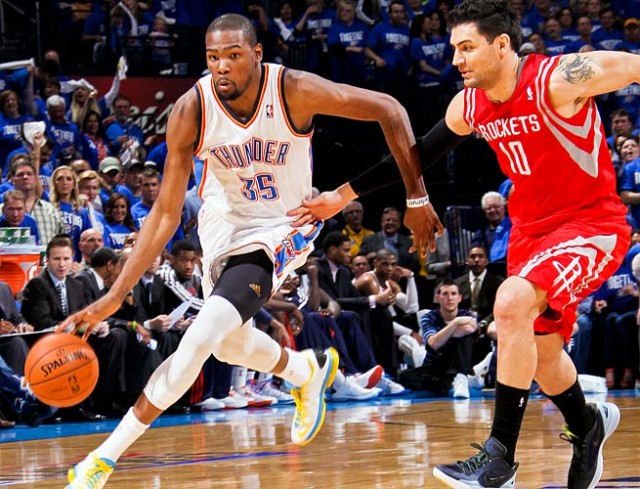 Things have changed drastically since then, with the Warriors and Hawks making big jumps and the Heat falling way back. The table below tracks the NBA title futures at Sportsbook.com and 5Dimes for the 2014-15 season and will be updated periodically throughout the year. As always, we encourage our customers to shop for the best line before placing any bet.

Following news of LeBron’s choice to opt out of his contract, the Heat dropped from +250 to +450 to win the 2014-15 NBA Championship. Once Chris Bosh and Dwayne Wade also opted out, those odds dropped back to +350. However, perhaps the biggest news came on Wednesday (7/9) following a three-team trade:

By completing this trade, the Cleveland Cavaliers were able to shed three contracts without taking any money back. This leaves them with $24 million of salary cap room — enough space to sign LeBron James to a max contract with enough left over to sign a few smaller role players.

After news of this 3-team trade hit, Cleveland moved from +1700 to +1200 while Miami dropped from +400 to +500 indicating that King James was seriously contemplating a return to his home town. Shortly after completing this trade, sportsbooks began posting the odds for LeBron’s return to Cleveland. On Thursday (7/10) afternoon, the well-respected 5Dimes made Cleveland a -320 to sign LeBron James with the field listed at +240.

On Friday (7/11) afternoon, Lee Jenkins of Sports Illustrated tweeted out LeBron’s free agency decision which caused a massive shift in the futures market.

With news that LeBron James would be returning to Cleveland, the Cavs saw their futures soar upwards and are the new favorites (+350) to win the 2014-15 NBA Championship. We’ve also heard reports that Cleveland could be swinging a deal for Minnesota’s Kevin Love which would give them a formidable Big Three of their own with James, Love and Kyrie Irving.

LeBron’s announcement should start a domino effect with many other players sure to sign soon. Rumor has it that the Houston Rockets are expected to trade away Jeremy Lin and use that salary cap room to sign former Heat F/C Chris Bosh to a max contract.

This is truly an interesting time for bettors to take futures since the available crop of unrestricted free agents includes players like Lance Stephenson, Pau Gasol, Paul Pierce and Luol Deng.

Carmelo Anthony is another huge name who remains unsigned, though the 6’8″ forward is listed as a -300 favorite to re-sign with the New York Knicks at 5Dimes. If Melo does pass up New York’s offer, many expect that he would take his talents to Chicago to team up with Derrick Rose, Joakim Noah and the rest of the Bulls teammates.

A number of major restricted free agents remain unsigned including Eric Bledsoe and Greg Monroe — not to mention Chandler Parsons and Gordon Heyward who have signed offer sheets from the Dallas Mavericks and Charlotte Hornets, respectively. Factor in the impending trade of Kevin Love and this could be one of the most interesting off-seasons in many years.

In other superstar related news, Tim Duncan exercised his incredibly team-friendly $10.3 million player option on Monday and will return to San Antonio for this 17th NBA season. This announcement moved the Spurs futures from +800 to +550 at Sportsbook.com. They have since dropped back to +600.

One interesting fluctuation involves the Chicago Bulls, who were recently listed at -120 to sign free agent Carmelo Anthony. After Melo opted out of his contract, the Bulls moved from 15/1 to 8/1 to win the 2014-15 NBA Championship. However, the New York Daily News reported that Carmelo would sign his max contract and return to the Knicks. This news dropped Chicago to +1000 but surprisingly caused the Knicks to fall from 50/1 to 60/1 to win the 2015 title at Sportsbook.com.

It’s also interesting to note some of the large discrepancies between these sportsbooks. The Los Angeles Lakers were listed at 50/1 at Sportsbook.com but have since moved to 30/1. Following news of Melo’s likely re-signing with New York, the Lakers plummeted down to +6500.

Which teams do you believe are offering value? Will LeBron finally bring a championship to Cleveland? Please leave your thoughts and comments in the section below.