Public and Sharp Bettors Taking the Celtics in Game 6 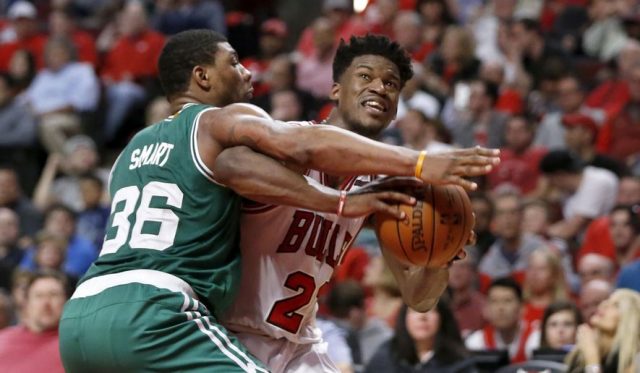 Public and Sharp Bettors Taking the Celtics in Game 6

After dropping the first two games of their Eastern Conference playoff series, the Boston Celtics (56-31 SU, 44-42 ATS) have defeated the Chicago Bulls (43-44 SU, 44-43 ATS) in three consecutive games to take a 3-2 series lead. In an interesting turn of events, the Celtics currently have the same odds of advancing as they did before the start of the series.

The Celtics clearly have all the momentum on their side, which made yesterday’s opening line fairly perplexing. On Thursday morning, Boston opened as 1-point road underdogs at the market-setting Pinnacle sportsbook. The line remained unchanged for nearly five hours until sharp bettors hammered the Celtics, causing the line to flip from Boston +1 to -1.

Since that time, public money has continued to back Celtics at a staggering clip. As you can see in the line chart below, not only has the percentage of spread tickets (84%) favored Boston, the percentage of money splits have been even more drastic with 95% of all spread dollars taking Celtics.

With the market steadily pounding the road team, oddsmakers have been forced to adjust their number multiple times, eventually landing at the current line of Celtics -2.5.

There was a Pinnacle steam move triggered on the Celtics, which caused the line to move from -1 to +1 yesterday afternoon at 3:06 PM EST. The line moved to Celtics -1.5 just minutes later. As public money continued to pour in on the Celtics and Rajon Rondo (thumb) was officially ruled out, oddsmakers were forced to adjust their lines once again.

The Pinnacle NBA steam move has gone 392-329 ATS (54.4%) on the spread and 367-314 (53.9%) on the total this season. Pinnacle caters to professional bettors, which means they take higher limits and therefore have sharper line moves. That’s one of the reasons why bet signals triggered at market-setting sportsbooks like CRIS and Pinnacle are consistently profitable across all six major US sports.

For more information on how bettors are viewing this game, I spoke with Scott Cooley, a spokesman from Bookmaker.eu. “[There’s been a] very big push from the pros on Boston tonight. They hit them on the opening pick ’em, at -1, -1.5 and -2. [The] public has piled on,” stated Cooley. “We were not expecting Rondo to play. Perhaps a tad low, but should get maximum effort from Chicago on its home floor tonight while staring elimination in the face.”

It’s also been interesting to see how public perception has shifted throughout the series. Despite their early struggles, the Celtics have received the majority of spread bets in every game with the exception of Game 2. It’s also interesting to note that tonight’s line (BOS -2.5) is identical to the closing line in Game 3.

With sharps and squares hammering the Celtics, oddsmakers have been forced to adjust their line by 3.5-points, moving from Chicago -1 to Boston -2.5. Although we constantly preach the value of betting against the public, contrarian bettors may want to think twice before going against the sharp action tonight.

Update: Since this article was originally posted, Jimmy Butler was listed as probable for tonight’s game due to a knee injury. Although he’s expected to play, this announcement caused the Bulls to drop from +2.5 to +3.