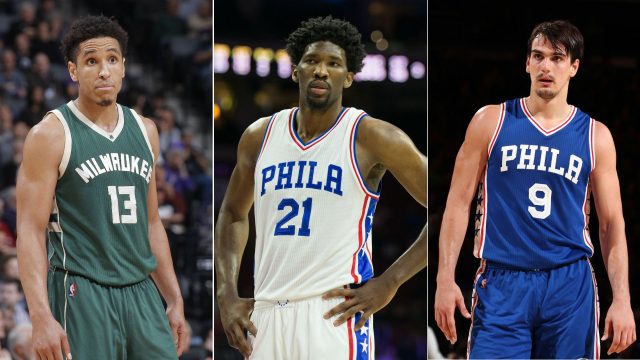 This evening, the inaugural NBA Awards will be broadcast live from Basketball City in New York. This voting includes marquee awards like Most Valuable Player, Rookie of the Year, Coach of the Year, Most Improved Player and many others. We discussed the odds for many of these awards before the start of the season, but 5Dimes recently updated their odds for four of the biggest awards along with odds for the field.

The list below displays how the odds for several major awards moved from May 16 to June 26.

Rookie of the Year

Coach of the Year

As you can see, oddsmakers think it’s a slam dunk that Russell Westbrook will win the MVP Award, Eric Gordon will win the Sixth Man Award and Mike D’Antoni will win the Coach of the Year Award. The most interesting debate involves the Rookie of the Year, where Malcolm Brogdon surpassed Dario Saric as the favorite. Since May, the implied probability that Brogdon will win has improved from roughly 44% to 85%.

Each of these players has compelling — albeit very different — arguments as to why they should win this award. Saric was arguably the most consistent player of the group, averaging 12.8 points, 6.3 rebounds, and 2.2 assists in 81 regular season games. Unfortunately, his team won just 28 games and Saric was very inefficient, shooting just 41.1% from the floor.

Brogdon, a second-round pick from Virginia, was a key contributor to a playoff team and would be my Rookie of the Year selection. The 24-year old guard averaged 10.2 points, 4.2 assists, and 2.8 rebounds in 75 games while playing lockdown defense and shooting better than 40% from long range. He may have scored fewer points than Saric, but his points came in meaningful minutes for a contending team.

Joel Embiid, who reached -2500 to win this award before suffering a season-ending injury, is considered a longshot at +1000. The versatile big man averaged 20.2 points, 7.2 rebounds, 2.1 assists and 2.5 blocks in just 31 games. There’s no doubt that Embiid was the most impressive first-year player, no Rookie of the Year winner has played fewer than 50 games (Patrick Ewing in 1986) in league history.

There are no odds available for some of the other major awards, but we’ll likely see those posted in the upcoming weeks. For what it’s worth, Kawhi Leonard was the preseason Defensive Player of the Year favorite.