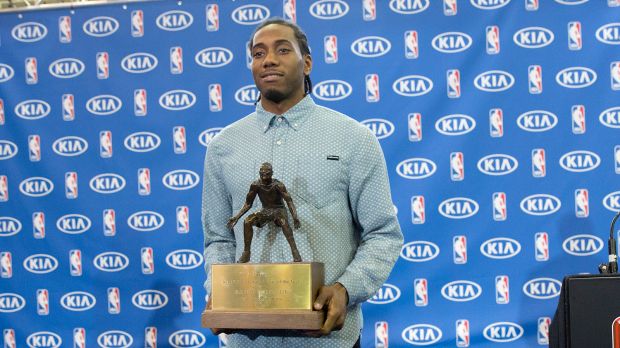 The odds for the NBA Defensive Player of the Year, as well as a few other NBA props and futures, have recently been posted at Paddy Power. If you’re looking to put some money down on the DPOY Award, here is what you need to know.

Kawhi Leonard is looking to win his third consecutive DPOY, which has only happened once in the award’s 30+ year history (Dwight Howard 2009-11). However, at just 25 years of age, Leonard’s lock-down defense should only improve. Given that he also play’s for Gregg Popovich and his defensive system, it would be very surprising if he failed to finish in the top three this upcoming season. He is currently the favorite at +350, which is a good payout in my mind.

Leonard has a few players that aren’t too far behind him, though. Draymond Green, who was second in the voting last season (547 points for Leonard, 421 for Green) is listed at +400. If you feel that the Warriors can be the juggernaut-type team that they hope to be, that will likely boost Green’s chance at the award.

Rudy Gobert and Hassan Whiteside, two shot-block extraordinaires, are both listed at +550. Gobert finished in a distant 7th in last year’s voting, while Whiteside finished 3rd. With Chris Bosh’s status unknown and Dwyane Wade out of town, Whiteside will be the star in South Beach this season and will likely see an increased role. If he can raise his blocks per game from last year’s number of 3.7 into the 4.0+ range, he will definitely get some first place votes.

A couple of names that I like further down the list are Marc Gasol (+2000) and Jae Crowder (+4000). Gasol won back in 2012-13, but has missed a big chunk of two of the three seasons since then. If you think he can stay on the court this season, he is worth taking a shot on. Crowder, who was buried on the Mavericks’ bench just a couple of years ago, has become a premier defender and well-rounded player with Boston. The Celtics are expected to win upwards of 50 games this season and Crowder, along with his teammate Avery Bradley, could see a top-5 finish come along with that team success.