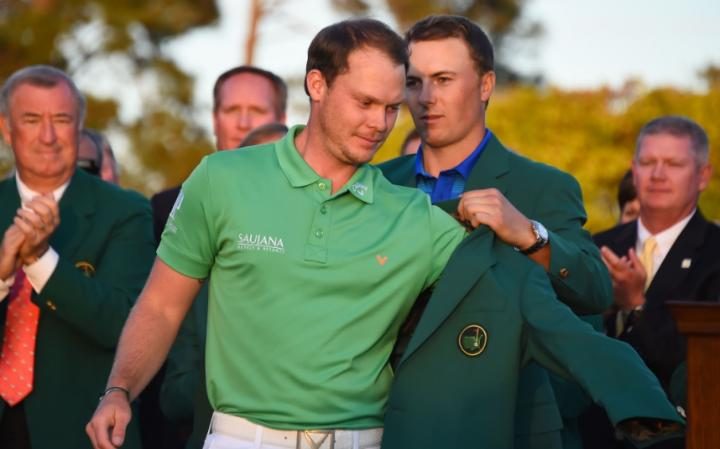 In Golf
By Dan McGuire

The 2017 Masters will be the 81st edition of this prestigious tournament, and takes place from April 6-April 9 at Augusta National Golf Club in Augusta, GA. Last year Danny Willett was the surprise winner at 125:1 odds to win the tournament after Jordan Spieth’s historic collapse, and below shows the most recent winners and their pre-tournament odds around the market:

The table below shows the odds to win the 2017 Masters from 5Dimes and Bovada:

A lot has changed over the last few months including an incredible surge by Dustin Johnson. He’s now the clear +560 favorite followed by Rory (+690) and Spieth (+725). Jason Day has run into some issues and moved out to +1955, while other players like Jon Rahm (+2000) and Justin Thomas (+3405) have improved their odds mightily since last season.

Last year’s Masters winner Danny Willett was listed at just 28:1 at Bovada back in August but moved to 60:1 in January. He’s now at 185:1 at 5Dimes so oddsmakers and bettors don’t like his chances of repeating whatsoever. For the casual golf fans, Tiger Woods is still injured and will not participate in the 2017 Masters. This is unfortunate for sportsbooks since public bettors love taking Tiger, but now those bets have been refunded.

At Westgate, Johnson is receiving the most money wagered to win, followed by Spieth and McIlroy. The top 3 are far ahead of anyone else, but Rose and Matsuyama round out the top 5 players wagered on. At William Hill US, it’s the same top 3 but in a different order: Spieth, Johnson, then McIlroy.

Are there any golfers offering value to win the Masters this week? Some of the staff at Sports Insights lend their thoughts:

My pick for the Masters this year is Louis Oosthuizen at +5500. I wanted to pick a player who has been playing pretty well lately, and has played well at the Masters before. Oosthuizen has made the cut in all of his starts over the last 6+ months, and has finished in the top 25 of the Masters in the last 3 years. There was also a 2nd-place playoff finish in 2012 at Augusta, and it doesn’t hurt that he’s won a major tournament before (The Open 2010). There’s a lot to like, a good price, and I think a bet on the Top 10 at +550 is also worth it.

At 43 years old, Lee Westwood is past his prime. However, this bloke loves playing at Augusta. Since 2010, he has five top 10 finishes and one 11th place finish at the Masters. Last year, he finished in a tie for second with Jordan Spieth. Given Westwood’s consistency in this tournament, 100/1 odds provide great value for a guy who has come so close to a green jacket so many times. Bet Lee Westwood at +10000 and you’ll be seeing green, too (see what I did there?).

Sergio’s best finish at Augusta is 4th but that was way back in 2004.  The last five years, he has had some mixed results with three Top-20 finishes along with a missed cut and a 34th place finish last year.  While driving accuracy is not a predictor of success at the Masters, driving distance usually plays a big role and Sergio Garcia currently leads the tour in strokes gained off the tee, just in front of tournament favorite Dustin Johnson.  The Spaniard will have to get hot with the putter which is usually his downfall, but if he can get some putts to fall then he should be in contention on Sunday.

With two second-place ties and a win in only three starts already on his Masters record, it’s no secret that August National sets up very well for Jordan Spieth. On the other hand, despite only one Top 10 finish in six Masters starts and a missed cut in 2016 that included a first round 80, Ricky Fowler has become a trendy pick to win the 2017 Masters.

To his credit, Fowler has played well so far this season, posting four Top 10 finishes and one win (The Honda Classic) in seven starts. With that said, Spieth is off to a very good start as well with four Top 10’s of his own, including a win at Pebble Beach. While Fowler certainly brings momentum into the week, Spieth’s current form and course history make him a very nice value at -121 to finish ahead of Rickie.

There are also plenty of prop bets available around the market and here are some notable ones via 5Dimes and BetOnline: