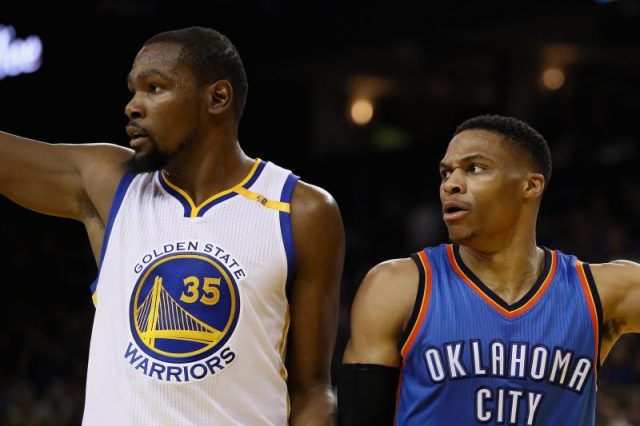 At last, the day has finally arrived! And on a Sunday night, no less. NBA MVP odds are up, with Paddy Power the first book to post them. Last year, MVP odds were up in early July, but one would imagine that all of the Kyrie Irving hubbub has delayed the process this year.

Last season, it was a two man race for most of the year as Russell Westbrook and James Harden both put up ridiculous numbers. Westbrook opened at +300, second on the preseason list behind the reigning winner Steph Curry (+250).

As you may have expected, the winners don’t often come from out of nowhere. Curry’s first MVP was the biggest longshot at 40/1, with new Cavalier and former owner of two functioning knees, Derrick Rose, the only other winner with longer than 7/1 odds.

Other offshore books are sure to follow up with their own odds and it will be interesting to see if they agree with Paddy Power’s openers.

Westbrook, along with ex-teammate and current arch-nemesis Kevin Durant, are the co-favorites at +350. Although Paul George will help the Thunder’s chances at a title (not really, though), he most definitely hurts Westbrook’s chances at an MVP. Don’t expect to see another 30-10-10 stat line this year. I would imagine Russ’s odds would have been somewhere around +200 if George hadn’t been dealt, but I guess we will never know.

I’m a little surprised that Durant has the same odds as Westbrook given the star caliber of his teammates. Last year, he didn’t even crack the top five in voting. The Warriors are great regardless of whether Durant is on the roster or not so it’s difficult to call him the “most valuable” player. Unless they can put together another record-breaking type year and win 70+ games again, Durant will have a hard time winning this award.

Like Westbrook, James Harden’s odds likely took a hit due to the Rockets’ addition of Chris Paul. Harden was a stat-machine last year, posting 29-11-8 averages. With Paul at the point now, it’s very unlikely that Harden will be able to come close to those numbers. There aren’t many stat-crazy superstars left in this league that aren’t paired with another star player so it is tough to rule Harden out, but splitting reps with CP3 certainly hurts his chances.

Although I don’t love the fella, I must admit that King James is a bit low on this list. To be honest, I think that if Irving is indeed traded, it could help James’s chances of winning the award for the first time since 2012-13. While the Cavs’ shot at winning a title will certainly be hurt, LeBron would likely run the show even more than he had been the previous two seasons. I can see plenty of folks jumping at a chance to take him at +750 and wouldn’t be surprised if these odds are in the 5/1 region before the season begins.

Who do you like? Will this year have a rare longshot winner or will one of the favorites get the job done? Let us know in the comment section below

Be sure to follow us on Twitter @SportsInsights for updated odds, betting tips, breaking news and injuries, and our most recent blog posts.