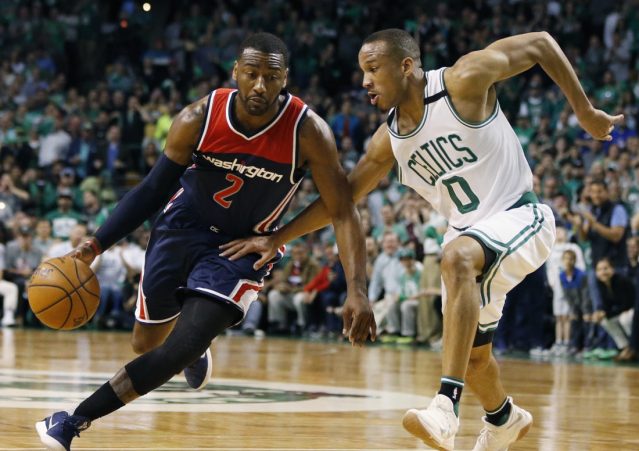 With 17 championship banners hanging from the rafters, the Boston Celtics (49-44 ATS, 21-26 ATS at home) are arguably the most storied franchise in league history. On the other side, the Washington Wizards (47-46 ATS, 20-26 ATS on the road) boast just one championship and haven’t reached the conference finals since 1979. None of this will matter when these teams face off tonight as each team vies for the opportunity to play the defending champion Cleveland Cavaliers.

The Wizards evened this series at three games apiece with an exhilarating 92-91 victory on Friday night, which continued the recent success of the home team in this matchup. Although the Celtics finally covered the spread in Game 6, the home team has covered the spread in nine of the last ten matchups between these teams. Perhaps that explains the early public betting trends.

After opening as 4-point favorites at Bookmaker, the Celtics have received 73% of early spread tickets and 65% of spread dollars. With the majority of public bettors on the chalk, Boston has moved from -4 to -5.

Immediately after opening at Bookmaker, there was a steam move triggered which caused the Celtics to move from -4 to -4.5 across the marketplace. Despite one-sided public betting, the line remained unchanged until Sunday at midnight when the Celtics finally moved from -4.5 to -5. The line is on par with the three previous games in Boston, but the public betting trends are significantly different.

Although the public betting was evenly split in all three previous games at the TD Garden, bettors are clearly reacting to the Celtics’ recent success at home. That’s somewhat ironic considering that the Celtics were actually far more profitable on the road than they were at home during the regular season.

With nearly three-quarters of spread tickets taking the Celtics in this heavily bet game, it’s easy to assume that public money is responsible for this early line movement, however, it’s actually sharp money moving the number.

“Public is on Boston at a 3-to-1 clip,” according to Scott Cooley, a spokesman from Bookmaker. “We’ve taken some sharp money on the home side, but they like the under more. Squares hammering the over, as they have done throughout this series, while the wiseguys are hitting under pretty good.”

As you can see from the sharp money report, the Celtics have been a popular bet for sharps and squares alike.

Tonight’s total opened 212.5 at Bookmaker and, as has been the case in every playoff game this season, the majority of bettors are taking the over. At the time of publication, 74% of tickets and 90% of dollars had taken the over. Despite this one-sided public betting, the total had actually dropped from 212.5 to 210.5. That reverse line movement indicates that sharp money on the under has been responsible for this two-point move.

Although Washington is being ignored by the majority of bettors, the sharp money indicators on Boston should cause contrarian bettors to think twice before fading the public. Instead, bettors would be well suited to wait until closer to tip-off and hope that public money inflates the total. If bettors can get anything above 211, there’s probably value on the under.