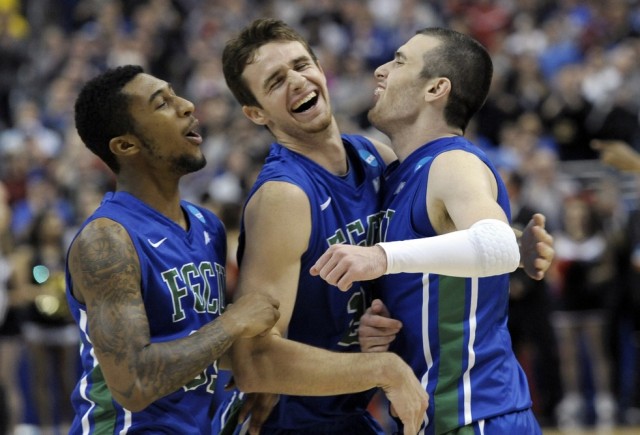 George Mason. Butler. Virginia Commonwealth. Florida Gulf Coast? After two shocking upsets over the second seeded Georgetown Hoyas and the seventh seeded San Diego State Aztecs, the FGCU Eagles find themselves with an improbable Sweet 16 matchup with Florida. But can Andy Enfield and his team continue their Cinderella story by advancing to the Elite Eight?

According to our College Basketball betting trends, FGCU opened as a 12.5-point underdog at the market-setting CRIS sportsbook and the public was quick to jump on betting the underdog Atlantic Sun champions. At the time of publication, 72% of spread bets had been placed on Florida Gulf Coast, however, the line had actually moved to 13. This reverse line movement would seem to indicate that sharp money likes the Gators giving 12.5 points.

But is fading the underdog really a good strategy with Florida Gulf Coast? After all, they’ve already won twice by double digits against higher seeded teams. According to the historical performance of public-backed underdogs — yes you should.

Using our BetLabs software, we found that there have been 114 games played in which the underdog has received a majority of public bets. In those games, the favorite has gone 66-48 (57.9%) with +14.8 units earned and a 13% return on investment (ROI). Below is a screenshot of the system within BetLabs. 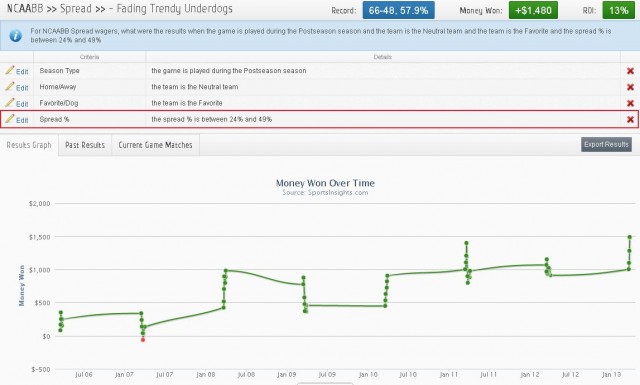 As you can see, we have narrowed down our search results by looking at postseason games played on neutral courts and then selecting only teams receiving fewer than 50% of spread bets.

The only thing that is predictable about March Madness is its unpredictability. Every year we see shocking upsets and deep tournament runs from unknown mid-majors, and for that reason the public’s betting behavior is altered significantly. Instead of predominantly betting on favorites, most people think all tournament teams have a fighting chance and will simply bet the underdog and take the points. Perhaps that explains why five of the eight favorites (Indiana -5.5, Louisville -10, Kansas -2, Duke -2 and Florida -13) are currently receiving less than 50% of spread bets.

Between the reverse line movement and our data regarding highly bet underdogs, it looks like there is betting value on Florida for Friday’s matchup with Florida Gulf Coast. In fact, favorites of at least 6-points have been particularly profitable with a 29-19 record with 8.8 units won and an 18.3% ROI.

Although this is a relatively small sample size, it fits our betting against the public philosophy which has proven to be consistently profitable over the last decade. These tournament games typically receive far more bets than regular season games, and more square bettors typically come out of the woodwork this time of the year. That creates even more contrarian value that shrewd bettors can take advantage of.

Do you think Florida will cover 13-points? Who will pull the big upset this round? Will anybody be betting this underdog FGCU team and taking the moneyline at +700? Leave your picks and comments in the section below.

Learn How To Use Bet Labs Webinar!

We recently held a...

How to Bet Baseball: Take Underdogs With High Totals

How to Profit From MLB Baseball Run Line Betting

At Sports Insights, our...