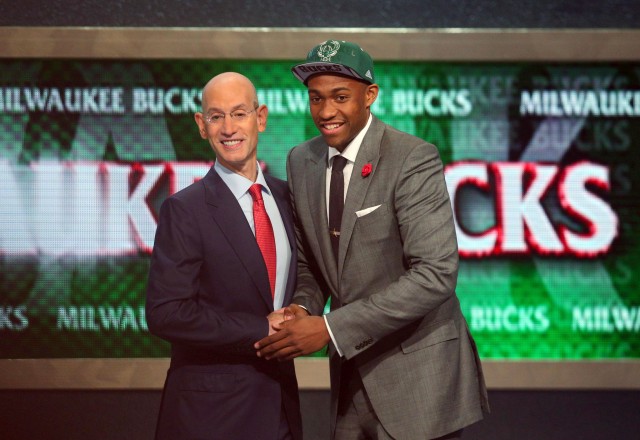 Entering the season, expectations were sky high for members of the current rookie class. Many analysts had hyped the 2014 NBA draft as the most talented since 2003 when LeBron James, Carmelo Anthony, Chris Bosh and Dwyane Wade were all selected in the top five. We’re only a month into the season, but it seems evident that much of this hype was overblown.

Looking back to draft day, we didn’t see the type of blockbuster trades many experts were expecting. However, we did see a number of surprises including the Orlando Magic’s selection of Aaron Gordon with the fourth pick, the Chicago Bulls trading up to draft Doug McDermott, and the Toronto Raptors selection of previously unknown Brazilian forward Bruno Caboclo.

That said, much of the draft went largely as expected with the Cavaliers selecting Kansas forward Andrew Wiggins, the Bucks selecting Duke forward Jabari Parker and the 76ers selecting injured center Joel Embiid.

Back in early June, Bovada posted their initial 2014-15 NBA Rookie of the Year odds with the more polished Parker (+500) listed as a slight favorite over the raw and athletic Wiggins (+550). Later that same week, The Greek, BetOnline, 5Dimes and Sportsbook.com posted their own odds which varied greatly from Bovada.

Since that time we have continued to update these odds, but as always, we recommend that all bettors should shop for the best line before placing a wager.

Immediately after the NBA draft concluded, Bovada posted a number of fascinating player props, but the two that caught our eye concerned the top two selections: Jabari Parker and Andrew Wiggins. Not only was Parker a slight favorite to be named the Rookie of the Year, he was also expected to outscore top-pick Andrew Wiggins.

The over/under for Jabari Parker’s rookie production has been set at 15.5 points and 7 rebounds per game. (via Bovada)

While Bovada had the top two picks neck-and-neck for the Rookie of the Year race, Sportsbook.com took a dramatically different stance. Although Parker’s odds improved greatly (+500 vs. +250), Wiggins odds actually fell off significantly (+550 vs. +800).

Now it’s hardly a surprise to see the top two overall picks listed as the favorites, but many bettors may have been surprised to see Nerlens Noel on this list — let alone holding down the number three spot at Bovada. Last season Philadelphia selected the 6’11” Noel with the 6th overall pick in the 2013 draft, however, Noel missed the entire season as he recovered from knee surgery. Yet again, these two offshore sportsbooks disagree on a player as Noel has the 3rd best odds at Bovada (+900) yet the 8th best odds at Sportsbook.com (+1800).

Because he did not play in a single game last year, Noel is considered a rookie for the 2014-15 season. This is not unheard of as Blake Griffin, who was drafted in 2009, was eventually named the 2010 Rookie of the Year after breaking his left knee cap in a ’09 pre-season game.

Last season’s National Player of the Year, McDermott finished as the NCAA’s 5th all-time leading scorer (3,150 career points) and should help provide the offensive spark that Chicago desperately lacked last year. Although considered as something of a tweener, McDermott is the type of NBA-ready player who should be ready to contribute from day 1.

How many points per game will #Bulls 1st round pick Doug McDermott average next season? The over/under is set at 11.5. (via Bovada)

We’re almost one-fourth of the way through the NBA season and there have been some significant changes to the Rookie of the Year odds. Recently Bovada re-posted this prop bet with Jabari Parker now listed as the clear-cut favorite at -110. Although Wiggins is shooting below 40% from the floor this season, the athletic wing is still second among rookies in scoring and at +400 has the 2nd best odds. While these odds are in line with the preseason odds, the remainder of the top five has seen a dramatic shake -up.

Nets SG Bojan Bogdanovic, who was drafted in the 2nd round of the 2011 draft, is currently averaging 9.9 points per game and is tied with Nerlens Noel (+550) for the third best odds.

The 76ers, who are in the midst of one of the most impressive tanking performances of all-time, selected two first round picks who are unlikely to play in a game this season. However, second-round shooting guard K.J. McDaniels is currently third in scoring among rookies (10.2 ppg) and is now +1200 to win Rookie of the Year.

Wondering what the odds have been for past winners? You can view pre-season Rookie of the Year odds for the last five seasons in the table below:

So who do you think will win the 2014-15 Rookie of the Year? How will Nerlens Noel bounce back after missing the entire 2013-14 season? Is Parker really a safer bet than Wiggins? Leave your thoughts and comments in the section below.